New York Times: The Climate-Friendly Vegetable You Ought to Eat The Climate-Friendly Vegetable You Ought to Eat | New York Times

Kelp is delicious and versatile, and farming it is actively good for the ocean. Melissa Clark wants you to just try a bite.

PORTLAND, Me. — It was a sharp, windy March day, but the gray water of Casco Bay glimmered green in the sun. On his lobster boat, the Pull N’ Pray, Justin Papkee scanned the surface of the ocean, searching for his buoys. But he wasn’t looking for lobster traps.

Mr. Papkee was farming, not fishing: His crop, clinging to ropes beneath the cold waves, was seaweed, thousands of pounds of brownish kelp undulating under the surface. Growing at a rate of 4 to 6 inches per day for the past six months, it was nearly ready to be harvested and sent to restaurants like Blue Hill at Stone Barns, Estela, Houseman, Saint Julivert Fisherie and Luke’s Lobster in New York, and Honey Paw, Chaval and the Purple House here in Maine.

He pulled a blade of kelp from his line and handed me a long, translucent strip. I took a bite, and then another, seawater running down my chin. 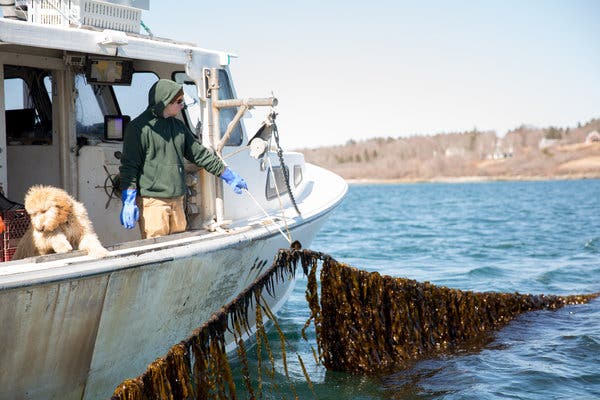 I’d eaten plenty of seaweed salads at Japanese and vegan restaurants, but this was not that. A variety called skinny kelp, it was lightly salty and profoundly savory, with a flavor like ice-cold oyster liquor, and a crisp, snappy texture somewhere between stewed collard greens and al dente fettuccine. The chef Brooks Headley, who adds it in slippery slivers to the barbecued carrots he serves at Superiority Burger in New York, described it in an email as “insanely delicious and texturally incredible.”

It was as different from the usual sushi bar seaweed salad as cottony, out-of-season peaches are from juicy, ripe ones from the farmers’ market: a wan substitute for what should be delectable. 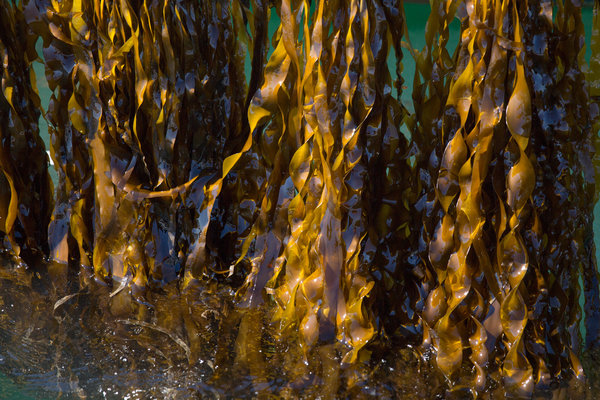 Harvesting wild kelp is ancient, but farming it is relatively new in the United States; it’s the main variety of seaweed being cultivated here. The technology was imported from Asia and adopted here by a group of ecologically minded entrepreneurs who view seaweed as the food crop of the future. Kelp is nutritionally dense (it’s loaded with potassium, iron, calcium, fiber, iodine and a bevy of vitamins); it actively benefits ocean health by mitigating excess carbon dioxide and nitrogen; and can provide needed income to small fisheries threatened by climate change and overfishing.

“Kelp is a superhero of seaweed,” said Susie Arnold, a marine scientist at the Island Institute in Rockland, Me. “It de-acidifies the ocean by removing nitrogen, phosphorus and carbon dioxide, which we have too much of.” 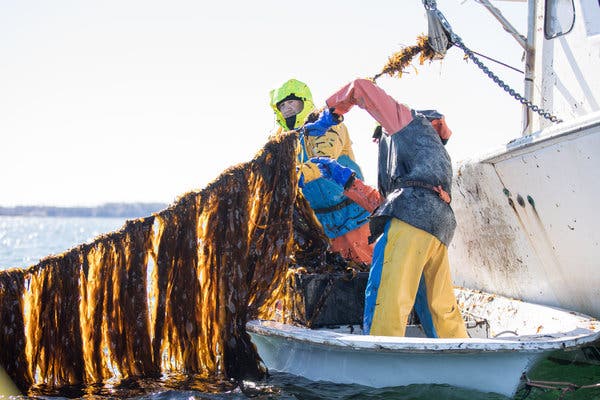 “Kelp is sustainable on so many levels,” said Briana Warner, the chief executive officer of Atlantic Sea Farms, a Maine kelp company that’s helping local fishermen start kelp farms. “It’s environmentally sustainable, it’s physically sustaining because it’s so good for you, and farming it helps sustain family livelihoods that are in danger of disappearing.”

Ocean scientists call kelp farming a zero-input food source. It doesn’t require arable land, fresh water and fertilizers (or pesticides). And kelp farming has been shown to improve water quality to such a degree that shellfish farmed amid the kelp develop noticeably thicker shells and sweeter, larger meat.

Before the first kelp farms started in Maine about a decade ago, if you wanted to cook with edible seaweed (not to be confused with the decidedly undelicious rockweed that washes up on beaches), you’d have go to the shore and forage it yourself. 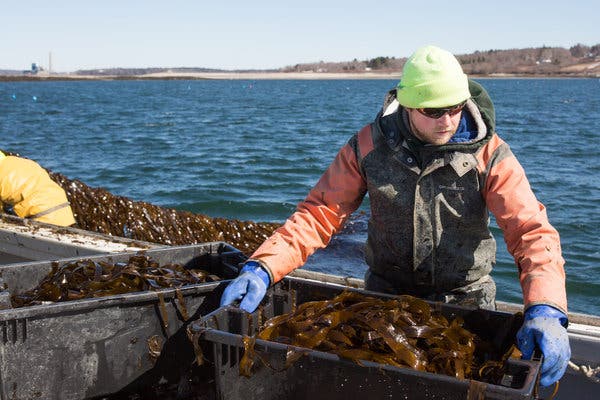 Sweet red dulse, inky alaria and ruffled sea lettuces have fed coastal communities for thousands of years. Traditional Welsh recipes call for frying fresh seaweed in bacon fat, while in Ireland it’s been cooked with potatoes, and in Scotland it’s made into biscuits and bread. Native Americans historically used all manner of seaweed — red, brown and green — both dried and fresh. And of course in Japan, cooking with seaweed has evolved into a highly refined art.

In the United States, though, dried seaweed has not yet left the health-food fringes, relegated to the same category as nutritional yeast and chia seeds.

One reason may be our lack of exposure to the good stuff. The majority of seaweed salads I get with my sushi are cloying and damp, lacking the mineral zing of fresh kelp.

John Magazino, a product development specialist at the Chefs’ Warehouse, a specialty food supplier for restaurants, explained why fresh kelp is so different from the seaweed you find in most seaweed salads: “Most of the seaweed salads we get in the States are imported from Asia, where they add corn syrup and dyes. Seaweed salad shouldn’t be sweet and neon green.”

Skinny kelp, a variety with narrow but thick, ruffled blades, grows over the winter months on ropes submerged in the Gulf of Maine.CreditMatt Cosby for The New York Times 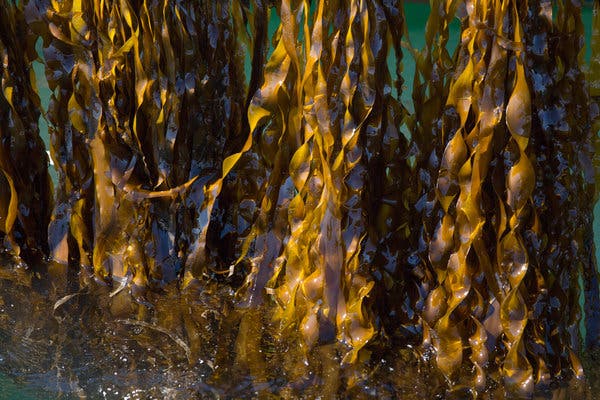 Mr. Magazino, who finds truffles and caviar for Daniel Boulud and David Chang, has been selling frozen fresh Maine-grown kelp to chefs for the past three years. He was on Mr. Papkee’s boat to make sure he’d have the quality and quantity of kelp he’d need for distribution to his high-end clients.

“Once the chefs taste it, and understand how good it is for the ocean, they all want in,” he said.

I suspect home cooks will, too. I returned from Maine with a suitcase full of frozen local kelp, and spent a happy, well-fed week cooking with the stuff until I ran out.

Because kelp develops in constantly changing ocean tides and temperatures, its cell structure won’t break down if you freeze, thaw and refreeze it, which makes it convenient to keep stashed between the frozen edamame and the sorbet. (Dried seaweed, like kombu, dulse and nori, are separate products from frozen fresh kelp, and require different preparations.)

Once the kelp thawed, I used it like any other green vegetable, throwing it into smoothies, salads and my soup pot, and sautéing it with garlic and chile. One night, I roasted it with potatoes and chicken fat until the top got as crisp as the seaweed snacks my 10-year-old daughter can’t get enough of, while the bottom turned silky soft, like creamed spinach with a saline kick.

But my favorite dish was anchovy pasta with a lemony, garlicky, pesto-like kelp sauce that flecked everything emerald and deepened the oceanic flavors in the pan. Even my daughter lapped it up.

Those are just a few of the possibilities. When the harvest comes in and I can restock my freezer, I’ll steam the kelp with fresh corn, stuff it into whole fish and scatter it over pizza.

Spicy, lemony pasta with anchovy gets an umami boost from a sauce made from puréed kelp.CreditRomulo Yanes for The New York Times. Food Stylist: Vivian Lui.

The only hard part for both chefs and home cooks may be finding a consistent source for kelp, which is available online and through a very small number of seafood shops, and in limited quantities. But the industry is young, and more fresh seaweed is becoming available on the market every year.

In 2015, about 14,000 pounds of kelp were harvested from farms in Maine, according to Jaclyn Robidoux, a seaweed specialist at Maine Sea Grant at the University of Maine. In 2018, that number was just over 53,000 pounds, and it is expected to reach more than 300,000 pounds this year.

Across the United States, she said, the opportunities for growth are huge. With its vast expanses of untrammeled coastline, Alaska is primed to overtake Maine as the state that produces the most farmed kelp.

In Maine, the majority of kelp farmers are from fishing families who have relied on lobsters for the bulk of their income. For them, kelp farming is a natural fit. The seasons are compatible; kelp farming takes place in the winter, lobster fishing in the summer. They already have all the necessary gear — a boat, ropes and buoys — and they understand the currents and tides of the gulf.

“Growing the seaweed itself is really straightforward,” Ms. Robidoux said. “I’ve run a kelp nursery in a seventh-grade classroom.”

It can also be a smart way for fisheries to diversify as wild species become less predictable. Maine’s cod, shrimp and sea urchin fisheries are either shut down or vastly depleted. And although warming water has contributed to a lobster boom in Maine in recent years, there’s been a huge decline in the herring used to bait the traps. So even if the lobsters are plentiful, catching them becomes much more complicated and expensive.

Keith Miller, whose family has been fishing in Maine for three generations, isn’t sure he’ll break even this summer.

“You’ve got to have a backup plan, especially now with climate change,” he said. “During the off-season, a lot of the guys work for other people, they do odd jobs, but I really want to stay on the water. Throughout the years, I’ve been urchining, I’ve been shrimping. But now that’s all done. So I figure I’ll try kelping.”

In Stonington, Conn., Suzie Flores is farming three acres of kelp near the bait-and-tackle shop she owns with her husband. She sells it directly to chefs, and also at the local farmers’ market for $8 per half-pound bag. At home, she cooks with it regularly, chopping it into vegetarian tartare and adding it to pizza for her children.

“I even mix it into my dog’s food,” she said. “Everyone in the house is eating kelp.”

So far, the profits have been on the low side. But as she beats the learning curve, Ms. Flores feels confident that they will rise. And even if they didn’t, the feel-good aspects of kelp farming make up for the lack.

“Every time we go to harvest, I think about all of the carbon we sequestered, and how much cleaner the water is,” she said. “For me, the farm doesn’t need to make money. Knowing that I’m helping the environment is enough.”